Games to learn Spanish in level A1 - Cronopios Idiomas

The new way to learn Spanish through playing

Playing is fashionable. It is increasingly common to find playful elements in apparently unrelated contexts (perhaps the clearest examples being the world of marketing and business), and words like gambling or serious games are on everyone’s lips. Teaching foreign languages is an ideal field for the application of some of these approaches, so in this entry we will talk about some games to learn Spanish in level A1.

Is it easy to learn Spanish with games?

We humans like to play. Disciplines such as psychology and anthropology have demonstrated the importance of the recreational dimension in the development of culture. According to the experts, when we play, as when we dedicate ourselves to everything that we are passionate about, time passes without us hardly noticing, because we have entered into a situation of perfect balance. For this to happen, however, a number of conditions need to be met, such as the rules being clear, the difficulty of the challenge we are facing being right and a precise objective being set. If these circumstances are met, there is no doubt that learning Spanish by playing is one of the best ways to do so. 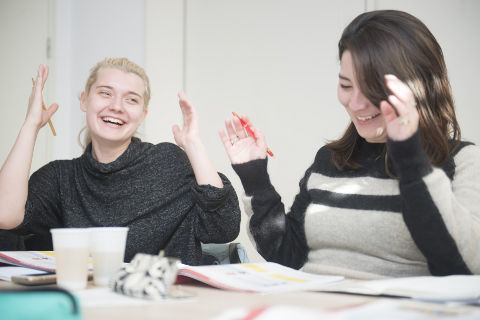 Why do you learn Spanish better through playing?

Playing is one of the purest forms of learning that exists, as it basically consists of understanding a series of rules and getting the most out of them. There are many similarities between the playful and the educational process, so the use of games in the learning of second languages is especially appropriate. For example, it is possible to play games alone, and also to learn a language, but it is certainly more satisfying to do so together with others. On the other hand, we learn by solving problem situations, and what is a game if not a big problem that we have to solve in order to be successful? We could also say that, in the two processes we are talking about, participants learn by doing; or that making mistakes is something not only natural, but necessary when it comes to perfecting our skills either as students or players. For all these reasons and others, Cronopios Idiomas strongly recommends the use of games to learn Spanish in level A1.

Some of our favorite games to learn Spanish

Below we show you some of the game titles that we like the most to learn Spanish and that we use the most in our classes:

With millions of units sold worldwide, Dobble is undoubtedly one of the most popular card games around. The rules are very simple: participants must quickly find the only image that repeats between two cards with multiple figures and say it out loud before the others. Always according to this premise, there are four different game modes. The fact that it is so easy to understand makes it one of the best games for practising Spanish in level A1 (Games to practice/for practising Spanish in level A1), since with it you can work on your vocabulary and pronunciation almost from the first day of class. Due to its small size and its more than affordable price (around 15 euros), it is also ideal for students to learn Spanish by playing outside the classroom.

Another classic, winner of multiple awards, including Game of the Year in 2010. The rules are also very simple: in Dixit, each participant receives a series of cards with quite surreal illustrations (some of them true works of art) that can be interpreted in very different ways. In each round there will be a storyteller, who will have to choose one of his cards and think of a phrase (it can be just one word) inspired by the image that appears on it; this card is then mixed with others, and the rest of the players will have to guess which one of them is the one the storyteller used to build his phrase. But be careful: it is important that it is not too easy or too difficult, because if all the players (or none of them) get it right, all of them will score points except the storyteller. The favourite of the most creative students, Dixit is a point of reference when it comes to learning Spanish with games.

And we end up with what is probably the least known of the three, but has already become one of our favorite games to learn Spanish: Duplik, perfect for practicing description and reviewing contents towards the end of level A1. One of the participants takes a card and describes the image on it as accurately as possible, while the rest try to draw it before time expires. Then the secret requirements of the image are revealed: details that have to appear both in the description and in the drawing (for example, if there is a person: how is his hair, what position is he in, what kind of clothes is he wearing, are his eyes closed or open, is he looking left, right or straight ahead…). For each requirement fulfilled, both the narrator and the cartoonist will earn one point. Don’t worry if the visual arts are not your strong point: in Duplik it’s not the quality of the drawing that matters, but the elements that appear in it, and a scribble can beat a Velázquez painting. That is why, as the manufacturer himself says, it is the drawing game for those who cannot draw.

Reasons to do an Intensive Spanish Course

Madrid life in all its glorious Madridness
Scroll to top