These days, more and more people all around the world want to learn Spanish.  Our language is 471.4 million people’s mother tongue, only behind Mandarin Chinese, and it’s the official language in 21 different countries, as well as having a very strong presence in countries like the United States. Every year, thousands of students arrive in Spain or Latin America with the intention of learning through immersion, and many of them pose the same question to teachers and experts: Can I become fluent in Spanish in a year? In this entry of our blog we’ll try to give an answer to that (spoiler: it’s not a resounding “yes” or “no”).

First of all, let’s state something that may seem obvious, but in our experience not everyone seems to fully understand: learning any language is a complex process and, as such, it requires work. Immersion is an excellent method to acquire a new language, and it’s been proved to be effective. But for it to be effective, the learners must make an effort to put themselves in a situation where learning can actually happen. This can be done in many different ways: by taking lessons with professional teachers at schools like Cronopios Idiomas, or interacting with locals in everyday scenarios, or maybe watching shows and movies that reflect the culture (or, ideally, a combination of them all). However, all these things take time and dedication. Living in a Spanish-speaking country is a great start, and maybe you could eventually learn the language just by listening and observing, but if you don’t want it to be an extremely long and slow process you must actively look for opportunities to study and practice. The good news is: it’s up to you! If you are really determined to pick up Spanish and you put in the work, you will see the results and will be encouraged to continue. Don’t give up even if it’s hard at the beginning! 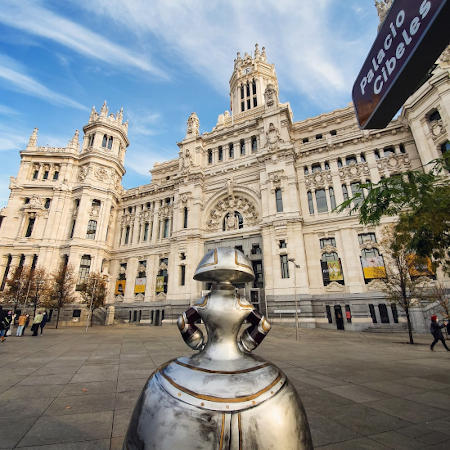 Now, although everyone should apply themselves if they want to become fluent in Spanish in a year, it’s true that this process may be a bit easier for some people than for others. For example, those students who already speak another language from the same family as Spanish (the other major romance languages are Italian, Portuguese, Romanian and French) will probably experience less difficulties understanding the grammar or assimilating the vocabulary due to the similarities between both languages. This, however, can become a double-edged sword: the fact that they are sometimes able to communicate and be understood even using words from their own native language may cause students to feel overconfident and end up speaking a mix of Spanish and some other language (Itañol and portuñol are famous examples) that can be functional at times but probably won’t be enough to get a job or access university.  At the same time, learners whose mother tongue is completely different than Spanish (most Asians, for instance) and don’t speak a second language will traditionally struggle a bit more, especially at the beginning, and can easily get frustrated when they see other classmates progress at a faster pace. There’s nothing wrong with that: all they need to do is to apply themselves and be patient: it’s not how fast you learn, but how strong your foundation is. Once you get the fundamentals, no matter how long it takes, everything will be easier and you will be motivated to advance. So don’t be afraid to ask, repeat and make mistakes: all three are essential parts of a proper learning process.

It’s also true, even in the case of students who come from the same country, that every person is differently gifted: according to Harvard University neuropsychologist and educator Howard Gardner, there are eight types of intelligence. Obviously, those with linguistic intelligence are more likely to have an easier path than those with, say, bodily-kinesthetic intelligence. But that doesn’t mean that the latter can’t learn a language or the former can’t learn how to play tennis: again, all it means is that some will have to push themselves a bit more than others. In almost 20 years as a Spanish teacher, I’ve seen countless Asian students surpass their European counterparts through dedication and study. Like Tim Notke, a high school basketball coach, once said: “Hard work beats talent when talent doesn’t work hard”.

So, to sum it up, what could we answer to those people who ask: Can I become fluent in Spanish in a year? We should probably say something like: yes, you can, as long as you are willing to put in the time and the work you need, which is different for everyone. Persevere, be patient, don’t get frustrated if things are not going as fast as you expected and you will be speaking fluently in Spanish sooner than you expect!

How to learn Spanish effectively

Spanish lessons for adults in Madrid
Scroll to top

You can find out more about which cookies we are using or switch them off in settings.

This website uses cookies so that we can provide you with the best user experience possible. Cookie information is stored in your browser and performs functions such as recognising you when you return to our website and helping our team to understand which sections of the website you find most interesting and useful.

Strictly Necessary Cookie should be enabled at all times so that we can save your preferences for cookie settings.

If you disable this cookie, we will not be able to save your preferences. This means that every time you visit this website you will need to enable or disable cookies again.