Ode to a local bar in Madrid - Cronopios Idiomas

This is our second post on places to go to eat or drink closeby to the school. This is an ode to a local bar in Madrid.

This bar will not feature in any guide, it won’t become a lonely planet hotspot or feature in a New York times article entitled something like ‘If you visit only one bar in Madrid’… It’s what might be known in England as your local, or in the US as a diner. But it’s in Spain and as such it is neither of these things, it’s a ‘cutre bar’ and we love it dearly. Newcomers to Spain may be confused by the napkins on the floor, that is until they find out that this is actually a custom, some other countries’ traditional bars have sawdust on the ground, here people throw napkins on the floor. Some, now equipped with the knowledge that this is normal might find themselves still confused, I find it endearing. It makes the place look well used, not flawless and sterile but much frequented and visited daily.

Becoming a regular, it turns out doesn’t require coming there for years, but a week or so before you get greeted when entering, and soon afterwards you don’t even have to order anymore, they’ll know what you want. Without fail this should be a ‘cortado’ (you may know this one by now as the big chains are starting to market it as they’ve run out of new Italian names) and always, a ‘pincho de tortilla.’

You don’t need to pretend to know much about tortillas, nor that our opinion will count for much in the controversial tortilla debates (ok ok, -with- onion, the potato -finely- chopped, and all very lightly fried) but theirs is the best. No, really, it is just the best. At least one of our students goes there every single day for his second breakfast and so eats their tortilla every day of the week, and claims to still relish the moment his break arrives and he can rush over there and tuck in. 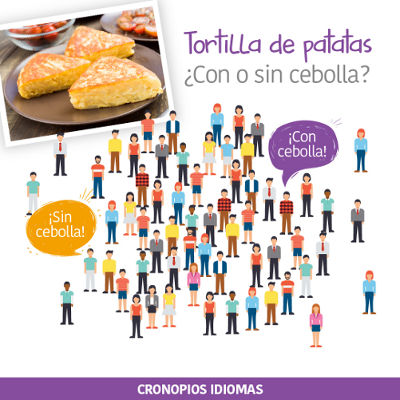 Another plus for him is that visiting the place so often has resulted in him being able to practice his Spanish in an environment that is now familiar to him, where the people know him and are always patient with his grammar and pronunciation. We always recommend people to use this approach; become a regular somewhere, invariably it proves to be really rewarding!

Tips for choosing a Spanish school in Madrid