So you’ve come to Spain, and are looking for some of that Spanish Republican romanticism? You’ve read Orwell and Hemingway and now want to feel a bit what they felt, but you’re on your lunch break from Spanish classes at Cronopios Idiomas? Then El Alambique Taberna (calle Fúcar 7) is one really good place to go, first and foremost for the hearty food and wine. But also in terms of atmosphere this bistro has got so much going for it, photos from the republican era, lots of Flamenco paraphenelia, to poetry randomly tacked to the walls.

In terms of the food, try the berenjenas con salmorejo (pictured), and the revuelta con morcilla. The former is breaded aubergine with, well, what is basically a cold soup but is put into service here as a sauce and it works beautifully! Salmorejo could be described as gazpacho’s heartier sister. It’s also a soup which must be served chilled, also has peppers as one of its main ingredients, but is creamier and less sharp. 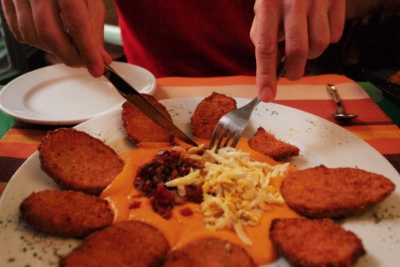 The revuelta, which is scrambled eggs with morcilla is made subtle with something called hierba buena which takes what could be quite a heavy dish and gives it a lighter twist. I don’t want to use hyperboles, but it can’t be denied, it really is very good!

The atmosphere can be described as follows: The place consists of two rooms, a bar area and in behind a small dining room. The former is filled up with a beautiful chaos of ‘objets trouvé’, old radios, tin cocoa cans, a tiny organ that apparently plays the internationale. The latter is decorated with many framed pictures, 30ies festival posters, black and white portrait photos, you get the idea.

What is also interesting to see is here the mix of anti establishment vibe going hand in hand with good music and good food. One of the other themes, apart from Spanish republicanism is clearly flamenco culture. And not so much the mainstream kind for the tourists but the gutsy kind that still comes out of the often arduous life experience of Gitano (gypsie) people. You will find this place to be practically a shrine of sorts for flamenco heroes like Cameron de la Isla.

To sum up, many a satisfying caña have been drunk here by the author! It’s the kind of place you find yourself starting off with a drink and a tapa or two and end up spending the evening and eating your fill. If you’re a Spanish Republican romantic worth her salt, then Alambique is the place for you.

Our school is surrounded by art

Take a literary Chill Pill in Madrid
Scroll to top